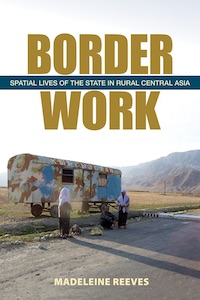 Border Work is a sophisticated, in depth ethnographic study of the borderlands and enclaves in the Fergana valley.  The book shows how individuals manage the complex borders between the Central Asian states that cut across their everyday lives. The book shows that the borders that were initially a ‘sieve’ became more rigid and reinforced national identities and competing state claims, not just through border guards, but also through the well-meaning construction of new roads that bypass enclaves and create new regimes of inclusion and exclusion.

The study is not only of borders, but also of new states that seek to enforce these borders to assert themselves. Just as the states seek to make borders and their officials impose identities associated with these states, individuals challenge them, like the family that seeks to bury their deceased in the ‘wrong’ state. Disjointed and seemingly arbitrary borders that are delineated in maps differ greatly from the social reality experienced by inhabitants of the region. 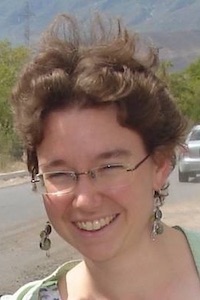 While the book is particularly pertinent for grasp of new borders that have emerged in the past twenty years in the post-Soviet and post-Yugoslav space, it also contributes to the understanding of many more borders around the world that fail to follow the rigid logic of state control and have individuals negotiating these lines of divisions. Reeves shows how the ‘state’ is not some abstract actor imposing on citizens in the border region, but is represented by border guards who also have to live and interact in the same community they are tasked to control. Thus, the state is not a distant, but a complex and contradictory presence.

Beyond the local context, the book highlights the larger connections communities in this remote border region maintain, especially to Russia where many migrate for work.  As such, the people Reeves talks to are not just part of a local community, but also engage in the post-Soviet space and negotiate multiple borders. Some mourn the end of the Soviet Union not for its ideology or power, but for the ability to cross now rigid borders and the distinctions between legality and illegality they impose.

Madeleine Reeves has written a book that is theoretically sophisticated and grounded in extensive field work in the Fergana valley over several years, making it an important contribution to our understanding of borders and their use in state formation.

The committee would also like to award an honorable mention to Willard Sunderland’s The Baron’s Cloak (Cornell University Press).

The short list of finalists included the following additional books:

Charles King, Midnight at the Pera Palace: The Birth of Modern Istanbul (Norton)

The winner of the 2015 Rothschild Prize was chosen by the following scholars: